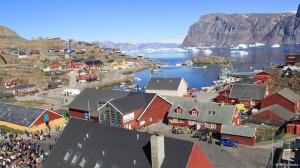 The people of Uummannaq are trying to adapt in order to survive. Photo: Mark Brooks

My documentary on the impacts of climate change in the Greenlandic village of Uummannaq aired in December on the Deutsche Welle international radio program Living Planet. I recorded and produced this report while working as the on-board journalist during the 2013 Students on Ice Arctic Expedition.

Located on a small island off the Greenland coast, 600 km (372 miles) north of the Arctic Circle, Uummannaq is one of many Inuit communities in the North that are already experiencing the impacts of climate change. Not only is the massive Greenlandic ice sheet melting, sea ice is starting to disappear too. This is causing serious difficulties for those working in the local fishing industry who depend on reliable sea ice conditions for their daily catch.

Traditionally, fishers here worked on a dog sled on the sea ice in winter and by boat when the ice melted in the summer. But now, as the ice is melting earlier and becoming less stable, there is a period of several months in the spring when the ice is not strong enough to hold dog sleds but can also not be penetrated by small fishing boats. This is leading to a host of social and economic problems for the small community.

Click here to listen to the documentary. The text of the story with accompanying photos is available on the DW web site.

This week, Deutsche Welle Living Planet broadcast the first of my audio diaries from the Students on Ice 2013 Arctic Expedition. This first audio postcard captures the reflections of Canadian high school student Gerrit Wesselink as he travels up the western coast of Greenland and across the Davis Strait to Baffin Island and the eastern Canadian Arctic. Gerrit talks about his experiences on the trip, which include polar bear sightings, zodiac cruises in a field of giant icebergs and witnessing first-hand the impacts of climate change in the Arctic.

I was fortunate to participate on the Students on Ice 2013 Arctic Expedition this year, which was a tremendous experience. We traveled up the west coast of Greenland by ship and across the Davis Strait to the Eastern Canadian Arctic. I produced a short audio documentary based on the experiences of two of the students on the journey and it aired on CBC Ottawa Morning on Monday, July 29.

This week on Earthgauge Radio, it’s our Doha Climate Change Conference special broadcast. We have several features on the program today:

We also have our usual update from Ecology Ottawa on local environmental events and campaigns. Click the audio player above to stream the whole show or right click here to download. Individual interviews will be posted shortly.

I’m feeling a little rough today and you’ll hear it in my raspy voice (apologies!) but the show must go on and today it’s our Doha Climate Change Conference special. To kick things off, we hear three reports from correspondents on the ground in Qatar reporting for Deutsche Welle Living Planet who give us some context on the lead up to the Doha conference, what is happening on the ground at the summit, and what is at stake.

Next I speak with Beatrice Yeung who is in Qatar representing the Students on Ice Alumni Delegation. Students on Ice is an organization based in Gatineau, Quebec that offers unique educational expeditions to the Antarctic and the Arctic. The alumni delegation is composed of students such as Beatrice who have visited the polar regions and are now advocating on behalf of polar conservation. Given the rapid changes taking place in these parts of the world, this entails taking serious and immediate action on climate change.

In the second half hour today, we hear a feature interview with the director of the remarkable new documentary film ‘Chasing Ice‘.  With all this talk about climate change and what the international community should be doing about it in Doha, sometimes it’s good to get a reality check from those out in the field. Dubbed by some as the new “Inconvenient Truth,” Chasing Ice chronicles the work of National Geographic photographer James Balog and his Extreme Ice Survey, which is a visual legacy of how climate change and other human activity is impacting the planet. Using time-lapse cameras, his videos compress years into seconds and capture ancient mountains of ice in motion as they disappear at a breathtaking rate. To find out more about the film, I caught up with the director Jeff Orlowski on the phone from Boulder, Colorado.  The film is being screened at the Bytowne Theatre in Ottawa from December 7 – 11 and Geoff tells us more about the filmmakers’ incredible journey to provide incontrovertible proof that our planet is in crisis and what we do to it matters.

We’ll also have our usual update from Ecology Ottawa on local environmental events and campaigns.

Earthgauge Radio airs Thursday mornings from 7-8 AM on CKCU 93.1 in Ottawa. Podcasts on iTunes and earthgauge.ca. Stream live on www.ckcufm.com. Check us out on Facebook atwww.facebook.com/EarthgaugeRadio.

Tomorrow on Earthgauge Radio on CKCU 93.1 FM, it’s our United Nations Doha Climate Summit special broadcast. We’ll hear audio from our correspondents on the ground in Qatar and a feature interview with the director of the remarkable new documentary film ‘Chasing Ice‘, which chronicles the astonishing changes currently taking place in the Arctic as a result of human-caused climate change.

We cover a lot of climate change stories on Earthgauge and that’s because, as you well know by now, it is really that important. Climate change is not just an environmental issue, of course, in fact it’s unfortunate that it continues to be framed in that way by the mainstream media. This may well be the most important economic, technological and social justice challenge of our time. Sine qua non.

So as another huge climate summit is now underway in Doha, Qatar, we’ll put our low expectations aside for the time being and try to get to the bottom of what is going on half a world away. Past U.N. climate change summits have achieved very little. Will Doha be any different? We’ll hear from correspondents on the ground at the summit including an interview with Beatrice Yeung, a young activist who is leading a group called the Students on Ice Alumni Delegation. She has seen for herself some of the dramatic changes happening in the polar regions so we’ll get her view of the proceedings as a youth observer and participant.

Also on the program, we’ll hear Doha progress reports from our friends at Deutsche Welle Living Planet and we have an interview tomorrow with the director of the remarkable new film ‘Chasing Ice’, which is running at the Bytowne Theatre in Ottawa from Dec. 7-11. With all this talk about climate change and what the international community should be doing about it, sometimes it’s good to get a reality check from those out in the field. With stunning cinematography and access to never before seen areas of the Arctic, Chasing Ice documents an incredible journey to provide incontrovertible proof that our planet is in crisis and what we do to it matters.

Tune in every Thursday morning at 7:00 AM to Ottawa’s only radio program dedicated exclusively to environmental news and commentary from here in Ottawa and around the world. Earthgauge Radio on CKCU 93.1 in Ottawa and online at www.ckcufm.com. Podcasts on iTunes and http://earthgauge.ca. 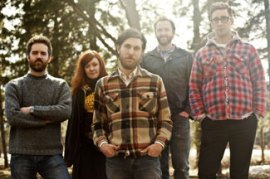 The environmental education organization Students on Ice recently departed on an Antarctic expedition with 60 high school students and an international team of scientists, educators, journalists, artists, leaders and polar experts. Among the participants is Tony Dekker, singer/songwriter for the Juno-nominated band Great Lake Swimmers.

Just before he left for Antarctica, I talked to Tony about his role on the expedition, why he wanted to take part and, as a musician, how environmental issues influence his songwriting. The Students on Ice program, now in its tenth year, has taken over 1,800 students, teachers and scientists from around the world on expeditions to the Arctic and the Antarctic. The goal is to give the world’s youth a heightened understanding and respect for the planet’s global ecosystem, and the inspiration to protect it.