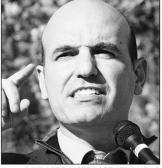 Leader of the Opposition. Cullen has served as the environment critic for the NDP so I asked him some questions about the proposed Northern Gateway pipeline, an issue we have discussed at length on Earthgauge. If constructed, the pipeline would transport tar sands crude from northern Alberta through Cullen’s riding of Skeena-Bulkley Valley in northern B.C. to the port of Kitimat. He has some strong opinions about the pipeline as well as some provocative ideas about how opposition parties can team up to defeat the governing Conservatives in the next general election. His proposal, which would be unprecedented in Canadian political history, has been generating a lot of controversy so I wanted to find out how it would work and why he feels so strongly about it.